Thank you for visiting my blog. Here's my family Christmas card and letter. I hope you have a wonderful Christmas. Merry Christmas! 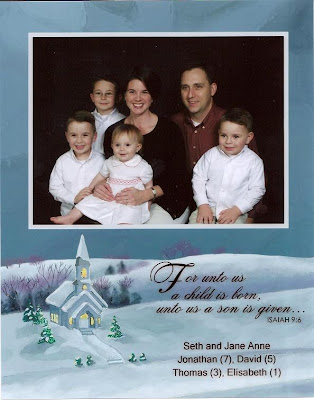 Owen family highlights from 2008:
January – Allergy tests confirmed that David is still extremely allergic to peanuts. He is also allergic to dogs, cats, and grass.
February – Thomas went to see his very first movie in the theater: “The Pirates Who Don’t Do Anything.” (Our kids sang the theme song from that movie for months!)
March – Jonathan lost his first tooth on Easter night.
April – Thomas turned 3 on April 21st. Jonathan turned 7 on April 23rd. Jane Anne got her first tattoo.
May – Elisabeth was 6 months old on the 17th. Elisabeth had her 1st food: baby rice cereal. Thomas tried some and almost threw up (whoops!). Seth had a birthday on the 21st (He thinks he is old.)
June – We toured the Target Distribution Center where Seth works. The boys were really excited to see Daddy’s office and spent weeks talking about it. (“It”= the inflatable bounce houses rented for the company picnic.) Elisabeth became mobile! She started crawling (doing the Army crawl).
July – The kids enjoyed lots of homemade popsicles and playing with the Slip n’ Slide. We celebrated our 13th anniversary on July 22nd.
August – All three boys took swimming lessons at the community pool. Daddy and the boys camped out in the backyard. They had a water fight, made s’mores, and all except Thomas made it through the night outside. Jane Anne had a birthday on the 6th. (She thinks she is still 25.)
September – Jane Anne started a new MOPS (Mothers of Preschoolers) year, working on the leadership team. David turned 5 on September 2nd. David started preschool. Jonathan started 2nd grade. Jonathan played soccer. Jonathan began a new year as a Wolf Cub Scout.
October – Halloween costumes: Jonathan was Spiderman, David was Superman, Thomas was Batman, and Elisabeth was a Fairy. Seth played volleyball for the church league (which kept him thinking that he is old).
November – Elisabeth turned 1 on November 17th. She took her first steps without holding on.
December – All three boys performed in a church Christmas play. David and Thomas sang and Jonathan had a part as King Herod. David performed in a preschool Christmas program. Jonathan sang in his school’s winter concert. Jane Anne joked about getting a tattoo in the Christmas letter. (That didn’t happen.)

Check out the family blog, http://www.owenhome.blogspot.com/, to see pictures of these events (and much, much more- including funny kid sayings and stories). Stop by often to catch up on our family!

We hope you are enjoying the Christmas season. We are thankful for you.
Sending love,
Seth, Jane Anne, Jonathan, David, Thomas and Elisabeth Owen
Posted by Jane Anne at 12:05 AM

So Beautiful was the picture, and we do a Christmas letter each year too, so I loved that as well. Really keeps everyone informed. Merry Christmas my friend.
XO<
Mimi

What a great letter! I have a video clip of Hayes trying the babies' rice cereal and him gagging and almost throwing up too! Is it wrong that I about peed my pants laughing? :)

What a great family picture! Your kids are just precious.

Have a wonderful Christmas!

Beautiful picture....Merry Christamas to you all!
Patti Brown

I love that picture! Thomas is looking a lot older!

Gorgeous picture and a wonderful family! Have a merry Chistmas!!

Thanks for blogging by! And I am happy to share the baking wealth! Beautiful family and fulfilling year! We write a fam letter each year too! Merry Christams to you and yours!!
~Stacey

Merry Christmas!! I love the month by month Christmas letter!

You have such a beautiful family! I loved the letter. It's been quite a year for you all!

Jane Anne
Why Gravity of Motion?

My Place by Sally Morgan

The Magic Strings of Frankie Presto by Mitch Albom

The Cutest Kids I Know

The Latest From My House

Grab the GOM button by copying and pasting the code below.